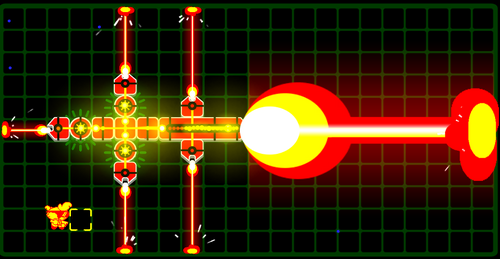 Big Lazers!
you can now build Lazers bigger than 2 long!

Game Options
Settings the host can set in the lobby to change the gameplay.
The 1st two settings are whether lazers are rotatable, and what is the max Lazer size allowed.

Map Maker UX improvements
new, quick + easy flow for play-testing a map you are working on in the Map-Maker.
Can Deselect things with Shift+ LMB.
Can select many things with a selection box.
Can set which team to build a thing for with number keys.

All players can save the current map in the lobby.
News feed in main menu.
Preview images for Custom maps.
The default game options for a map can be set in Map-Maker.
The starting Energy for a base can be set in the Map-Maker.
Barrier blocks can be sold at the shop.
Lobby chat UX improved.
More chill music plays in lobby.
Gamepad controls improved.
Free version of the game has been updated, so 'Play now' is still compatible with the free WebGL version.

The fury of Bomberman with the strategic depth of an RTS